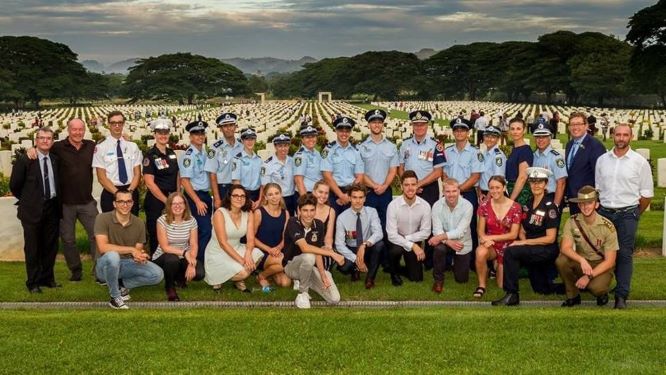 2018 – Walking the Kokoda Track is one of life’s experiences!

NT Police Legacy is invited by NSW Police Legacy to accompany them on their annual Kokoda trek. This was the 8th year members of the NT Police family have attended.

This year Vicki Richardson and I were the only two NTP members participating. The Trek took 10 days, from the 15 to 24 April 2018. Joseph Huitson attended as the nominated NT Police Legacy Legatee, he was the 4th NT Police Legacy Legatee to attend. Joe is residing in QLD with mum Lisa & sister Ruby Huitson. Joe is currently attending the Bond University, doing his third year in a Business Economics and Global Business and Strategy.

All participants of the event are required to fund raise and a quiz night was also held; this year a total of $6,638.55 was raised, all proceeds are used to fund the NT Police Legacy Legatees attending.

Our group booked with ‘Our Spirit Adventures’ which is considered the ultimate Kokoda trekking experience. It is led by Aidan Grimes who has been walking the track for 25 years, this was to be his 113 Kokoda trek.

Day 1 started very early with a flight from Port Moresby to Popondetta. From there we were loaded into the back of a couple of open aired trucks and we drove for about 3 hours along a windy, bumpy, dirt track, until we reached Kokoda Plateau. After our packs were weighed, walking poles purchased & the porters assigned, we headed off at about 1.00pm. But not before a group photo at the Kokoda Arch.

Each morning we were awake by 5.15am. Time to pack up the tents, have breakfast & be ready for the days briefing. We walked out of camp at about 7am each morning. The briefing included a history lesson on the part of the track we would be walking, which included the events from WWII that our Aussie diggers experienced. There were amazing stories of bravery, sacrifice, courage and mateship; stories to reflect on if your day got a little tough, you remembered that you were walking in the footsteps of the Australian diggers, who’s supreme and unselfish sacrifice gave us the freedoms that we have in Australia today. And a quick look over your shoulder always gave an appreciation of how far you had already come.

As the days passed, the group continued to move along the track, heading back towards Port Moresby, a mere 96km as the crow flies. Some of the group were equipped with gadgets that measured the trek at about 130kms. Whatever the distance, the group moved well as a team, with the distance between first and last reducing significantly as the days progressed. Apart from the history lessons, the next best thing was the mateship on the track. The track is very physical, the weather was unpredictable and some experienced stomach bugs that made everything that much harder. Walking the track gave the group the opportunity to get to know the other participants and to witness the strengths of mateship shown through the support and encouragement of others. The group was friendly and helpful and it was a privilege to get to know the Police Legacy Legatees, as they were a wonderful group of young men and women. Life is pretty simple on the track, it takes you back to the basics and emphasises what is important. The local people are happy and friendly and their days evolve around family and survival.

The last day started with an earlier rise and a quick trek up to Owens Corner, just in time to see the sun rise. It was truly an amazing feeling to reach the top of Owens Corner and walk through the Kokoda Arch, a real sense of personal achievement as well as relief! I have huge respect for our diggers, the ‘fuzzy wuzzy angels’ and also the Legends who carry our packs today. As well as a sense of gratitude for the life and comforts that I have in Australia, and the memories of the whole experience that I shared with a group of amazing individuals.

Walking the Kokoda Track is one of life’s experiences. If you are injury free and committed to the training, then I recommend you nominate and see where that leads you.