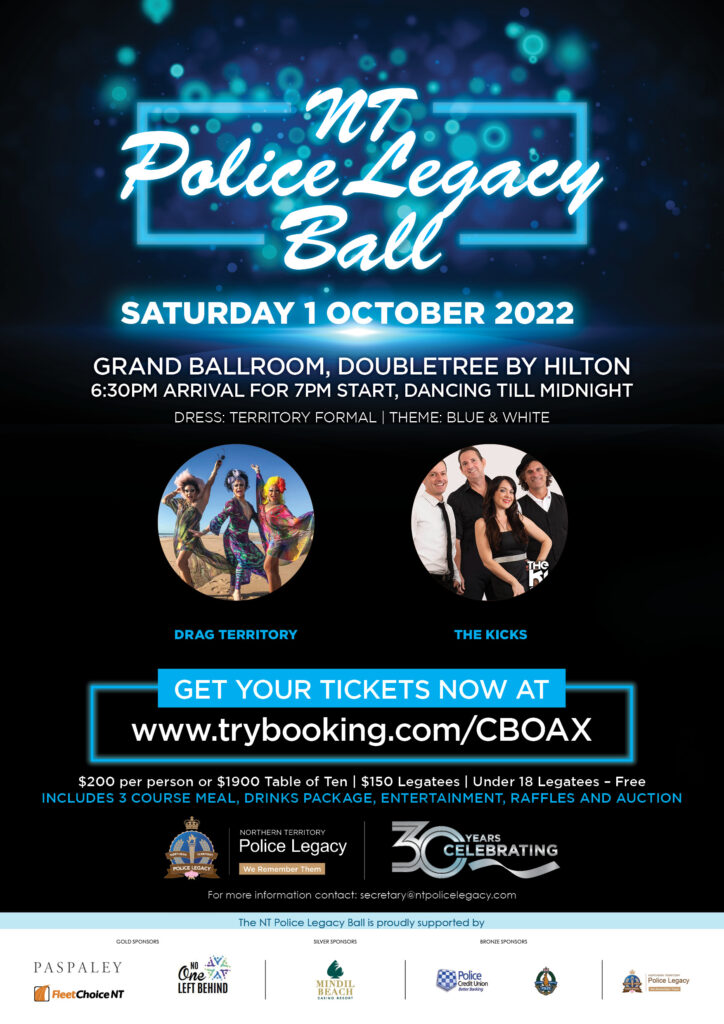 The Commissioner of Police hosts an Ecumenical Service in Darwin and services are held at regional locations throughout the Territory. We would love to see your support by attending one of our services or purchasing NPRD merchandise.

Support can be made by donation, regular deductions and in the form of a bequest.

If you would like to donate to Northern Territory Police Legacy, please consider:

NT Police Legacy is grateful for the support from our Police contributors. Through their generosity we are able to provide a service to those in the `police family’ who have been struck by the loss of a loved one.

If you are a NT Police Officer or Government Employee who would like to make a regular contribution to NT Police Legacy through the payroll system please contact NT Police Salaries or simply go to myHR > My Money > Payroll Giving > CONTINUE button (bottom of the page) > click on Charities under the New Deduction option. You can view the list of registered charitable organisations on the drop down list. Select ‘Northern Territory Police Legacy’. The Number of Deductions can be selected from the drop down list, select ‘unlimited’ for a fortnightly deduction. For more information, see http://ntgcentral.nt.gov.au/my-job/pay-and-conditions/payroll-giving-program and for frequently asked questions see http://ntgcentral.nt.gov.au/my-job/pay-and-conditions/payroll-giving-program/payroll-giving-program-faqs.

If you would like to donate direct to NT Police Legacy you can do this through the Go fundraise link below.  All donations over $2 are tax deductible and are greatly received.

If you would like to donate to NT Police Legacy, you can deposit directly into our account:

Northern Territory Police Legacy incorporated is a deductible gift recipient which means that donation made to us of $2.00 or more are tax deductible.