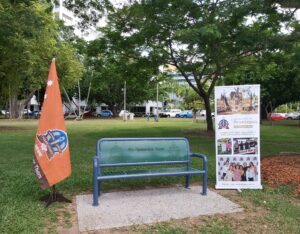 NTPL currently has two locations that are used to commemorate the loss of our deceased members and to also remember the families that are left behind.

These locations are The National Police Remembrance Day Wall, at Bicentennial Park, The Esplanade, Darwin and the Remembrance Walk at the Peter McAuley Centre at Berrimah.

NT Police Legacy has adopted the concept of the Reflection Chair from SAPL, who in 2015, in conjunction with local government and community, organised the placement of a Reflection Chair.

SA Police Legacy reasons for the chair was to provide an area for police families to be able to reflect on their family and friends who had died through suicide, but an area specifically for suicide was perceived as problematic so the board decided on an area of remembrance that was in an area open to the public and might provide a focus for reflection for family and friends. Members who died whist on duty are immortalised in the National Police Memorial. Members who died whist serving, particularly due to PTSD, now have a place for remembrance.

The purpose of the Reflection Chair is to provide an area where police families and former colleagues and friends of a deceased police officer are able to visit, sit and reflect on their deceased loved one / friend in pleasant surrounds. While the site is designated as a Police Legacy Place for Reflection and would also be promoted via police linked agencies it was not envisaged that it be an overtly formal site but one providing a place for private self-reflection. It was proposed that the site be in an existing gardened area that would provide general access and be in the vicinity other community amenities. The sites all have free access and are not on Police premises.

The concept of a bench with the NTPL emblem on the bench would be appropriate to allow people to sit, notice the emblem and reflect in a manner that suits the individual. Some families may wish from time to time to place flowers on the bench or in the area as part of their reflection.

The sites for the Reflection Chair have been best placed in a central site at each location, in conjunction with local council and community groups. The location of sites was considered on the basis that the location has good general access, parking, well maintained gardens/park and road and walkways. Areas of lawn surrounded by treed areas that would provide suitable areas for the proposal.

The NTPL Board decided to do away with a traditional plaque and to have the NTPL logo cut into the back of the chair. The words ‘we remember them’ are also included which is not only about bringing an awareness of loved ones to mind, but calls us to do things to honour their memory and the impact they have had upon us.

A lot of thought went into the design in order to reduce the risk of potential damage and ensure the bench is safe and around for a long time to come.

Local councils at each location were contacted and were very supportive of the proposal in principle, from there a sub-committee was formed and a local park was nominated to be used for the purpose.

Today’s unveiling of the Reflection Chair at Bicentennial Park is the first of four events involving the unveiling of the NTPL reflection Chairs. The other chairs will be located at the Katherine Museum grounds in Katherine, at Mary Ann Dam in Tennant Creek and at Araluen Park in Alice Springs. It is hoped all benches will be in place prior to Christmas.